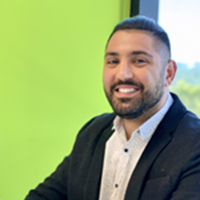 Nima Moridzadeh is an Account Manager within the Direct Hire group at Collabera.  In his time with Collabera, Nima has formed partnerships with various top ENR and NMHC ranked companies throughout the country to assist them in finding top talent to join their team. He specializes in working with commercial and multifamily companies that do both ground-up and TI work within the multi-residential, OSHPD, Class-A office, K-12 and commercial space. With three years and counting of experience in professional staffing, Nima has established himself as the “go-to” recruiter for his clients. Nima graduated from Cal State Fullerton with a Bachelor’s in Marketing.  In his free time outside of work, he enjoys playing basketball, traveling, working on cars and hanging out with friends. Nima currently works and resides in Southern California.

Submit your resume, so our recruiters may contact you for job opportunities. Our site has detected that your web browser is out of date. You may not be able to access all of the latest features on our site. For the best experience, we suggest you upgrade your browser to one of the following versions: